Hi, we're the team behind Love Nikki's Event Cost Breakdown sheets! Check out our carrd for more information about our sheets and the people in our team! 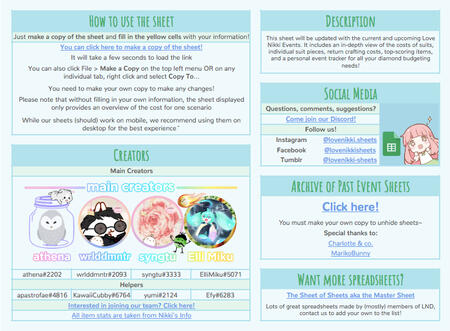 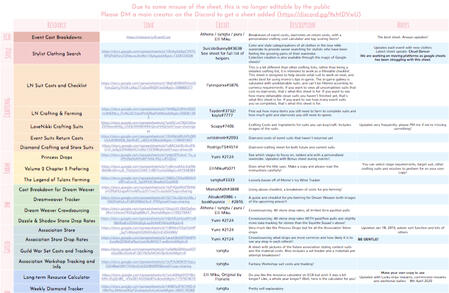 Lots of great spreadsheets made by (mostly) members of LND, contact us to add your own to the list!

Here are some helpful resources for you to create your own spreadsheet!

stay up to date

LN Sheets began when Pura started making very helpful cost sheets for every event. Soon, Florielle started making her own sheets with real-time tracking, that heavily borrowed from Pura's. Eventually the two started to work together on the sheets, but the sheets were very ugly. So one day, syn decided to reach out to Pura and asked if she could help out with sheet aesthetics. Thus, the duo became a trio.

However Florielle and Pura were both going to become busy soon, and they didn't know if they would have much time to work on sheets. Syn had the idea to create a server to recruit for some helpers, since she used server invite links to recruit before.

They eventually hired a few helpers and the server grew and grew from that point on. Now we have a full team to help out with multiple aspects of the sheets and the server, and it wouldn't have been possible for all of the lovely squirtles who contributed to the team past and present, and of course our lovely community who support our sheets!